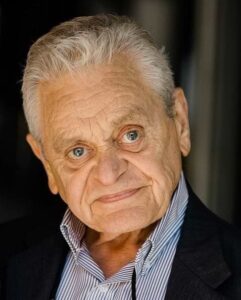 Mel is a highly regarded pioneer of Canadian theatre, a director of international reputation and an innovator in acting training technique and philosophy. In a career spanning 55 years, he has performed in dozens of plays, founded 9 theatre companies and has directed over 300 shows across Canada.
He headed the drama department at Ryerson University for 13 years and originated and ran the Gastown Actors Studio conservatory for 12 years. Mel taught at the Banff Centre for Arts and Creativity for 3 years and has also been periodically teaching at VanArts for the past 5 years. He has taught advanced scene study at his Austin-Tuck Studios for the last 18 years. Mel holds a BFA from the University of Alberta.
He has been recognized in 2019 with the John Juliani Award for Excellence / Lifetime Achievement Award by UBCP/ACTRA. He has been nominated for two ACTRA Awards, a Canadian Film Award, and has won two film festival awards.
In 2019, Mel can be seen in the comedy-drama Elsewhere opposite Aden Young and Ken Jeong, the comedy Buddy Games opposite Josh Duhamel, and on television in DC’s Legends of Tomorrow, The Detour, and Gabby Duran & The Unsittables. He will next appear in the TV series Family Law with Victor Garber, as well as in the Netflix romantic comedy Love Hard with Nina Dobrev and Charles Melton.
TRAIN WITH MEL